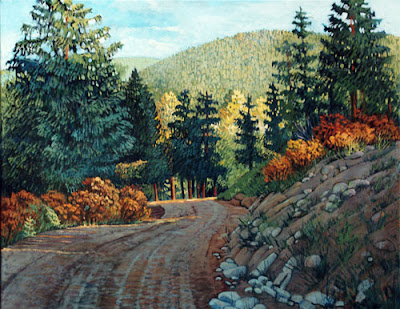 Santa Fe 1967 - Altitude sickness overcame me our first month in Santa Fe - sleepy, very tired.  The days were spent changing diapers, feeding babies, unpacking boxes and trying to adjust to all the changes.  The girls were beginning to crawl and had to be watched every minute.  They had these little stroller seats with trays and could roll around the living room bouncing into one another. A pile of Cherrios kept them happy. My son was restless and still trying to figure out how to get along with his sisters and his new environment.  In a way he needed me more than the girls.  That September was a time of doing the things in life which must be done - first things first - one day at a time.  I missed the familiarity of my old life in Chicago.

Our little adobe house was ancient and in the mid to late stages of decay.  The yard was rather forlorn and weedy.  The only view was toward the dirt road that ended at our place.   Although I made a great effort to be cheerful and present, I was hurt and angry to be facing all these changes due to my husband's betrayal.  This was a very sad and lonely time for me.  It was a relief when he went to teach every day.   There was no going back from this dark place - in sickness and in health, until death do us part. I regretted saying those vows because now they meant less than nothing.

My children kept me focused on their well being.There was no way I could fall apart.  Although I felt strained at the seams, they needed me to be healthy and whole.  My saving grace was the routine necessary to keep them well nourished and loved.   They needed me - I couldn't fall apart.  The only thing missing was a chart or a map as to how to move forward - in the meantime we all needed some good naps!

Our friend and neighbor, Ernie, bought a Harley! It was the end of September.  One Saturday he came roaring over and took my husband for a ride.  It was my turn.  I had no idea what to expect.  Off I rode into city traffic holding on tight - riding off into the great unknown without a helmet!  In a short time we were out of traffic and climbing.  There were open spaces on either side.  A few adobe houses here and there. The sky was a brilliant New Mexico blue.  Yellow aspen trees began to appear, pinons- we climbed higher and higher.  The wind, the trees - and finally we were in a place at the top of a mountain - the light was blinding.  He told me this was Hyde Park.  I didn't know it then, but Ernie was another Wayshower.

At first I didn't know what I was feeling....is this freedom?  As I am writing this today the words from Me and Bobby McGee keep popping into my head "Freedom's just another word for nothing left to lose."