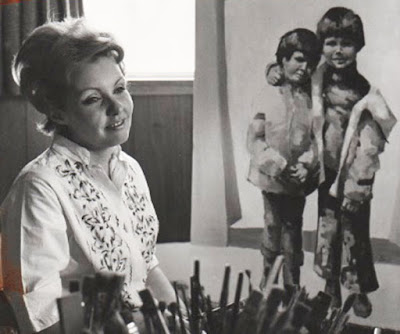 So many, many years later I now realize that trying to raise children in a toxic marital environment can be considered abuse.  In retrospect all the misgivings I had about divorce were still alive and well as we prepared to leave that pretty little, terribly unhappy house on Sombrio Drive. We moved to a small somewhat uninspiring place on Kiva Road in Casa Alegre in November of 1968.  At first we all went through feelings of being displaced - confusion reigned.  Gradually we began to bond as a family of four - we were out from under the cloud of constant arguments and tension.   Being together in this house was our new normal and it began to feel good!

There was a large, beautiful back yard. with lots of trees and hiding places.  Once all the pails, shovels and little bikes were in their new home, it all felt real - here was breathing room!  There was an exuberance building in all of us.  At night I would put on my favorite Jim Croce songs and we would all do a mad dance to Bad, Bad Leroy Brown.  We were learning how to have fun!

Our divorce was final in early 1969.  Their father married one of his college students one week later.

Gradually things began to lighten up.  It still was hard for me to leave them with the babysitter in the morning when I left for the law office.  It was important for us to have a routine - times when we were all together.  Dinners and bath times for the most part were delightful.  After I put them to bed, I changed to my work clothes and went to my easel and worked for three or four hours.  The day before payday was our "treat" night.  The four of us would dress up and go to Furr's Cafeteria in DeVargas Mall.  Fried chicken, mashed potatoes and gravy!  Walter Goetz (son of the famous Hollywood costume designer, Charles LeMaire) played oldies but goodies on the grand piano.  Afterward we all went to the bookstore and they picked out whatever they wanted - coloring books, crayons, puzzles.  I can still picture their faces in the bookstore - excitement; best of all, Curiosity.

Each year at midsummer monsoon season arrives here in the high desert.  Thunderstorms begin with low rumbles in the distance. As the thunder gets louder and closer, we know a "gully-washer" is headed our way.  The four of us would gather up pillows and blankets and make a huge bed on the living room floor.  Story books, coloring books and crayons lay all around us in little piles.  This was a special family time.  Often the electricity would go out and the bright lightning flashes would prepare us for the loud thunder to follow.  We would count - one thousand one, one thousand two...the time between seeing the lightning and hearing the thunder measured the distance between us and the storm.  The louder the thunder, the more we huddled together.  There were times when we could hear the sizzle of the lightning and within a second the boom of the thunder - the windows would rattle loudly and the rain would pound on the roof - the end of the world!  Gradually the storm would move off into the distance and we could relax.  Time for some milk and cookies.  Remake our beds and settle in for the night. Unforgettable....

We had Sunday picnics - the Pecos Monument, Puye Cliffs, Hyde Park.  The three of them would run and roam in all directions, exploring their rapidly expanding world.   They were babies no more!

That first Christmas on Kiva Road, Ernie went to Baillos, the appliance store in Albuquerque, and bought us a color TV!  Ah - Sesame Street in color!  The girls decided they wanted their own TVs in their room.  They drew their own sets in indelible markers on the white wall beside their beds.  No amount of work could erase those little TVs!  Am sure they still survive under countless coats of paint in that little house on Kiva Road.

John and the twins spent Easter with their father and new stepmother that year.  My first holiday without them was definitely a heartache.  About six that Sunday night the whole gang appeared in my living room - My three "babies", their father, the stepmother (sporting new and really perky breast implants) and her daughter, who was in the process of being adopted by my ex-husband.  He puffed up to an imposing height and informed me that now he had a "real family", he was preparing to sue me for full custody of my children.  Deep wounding FEAR!  And then I got pissed and told them to leave!  In my heart I knew his only motivation to want custody was to get out of paying the court ordered $250 a month support payment.  No matter what, he would never raise my children!

For the first time since leaving Chicago I felt a freedom I had never known.  My life was my own and I was content to work hard and raise my babies.  Damn that man! In a way I was still afraid. I refused to be at his mercy!  The next night after I put my gang to bed, I went out to my little studio, filled up my palette with new, juicy globs of beautiful colors and started a new painting!