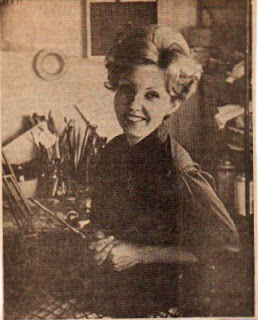 Fall 1968/Winter 1969 - After the workshop at Cloudcroft, I settled in to take care of the babies and painted every spare moment.  Very surprised that the alla prima method came easy for me.  I was basically experimenting with the paint - every painting was a surprise.  Ernie exhibited his sculptures at the Albuquerque Arts and Crafts Fair every summer and sold well - it was a hefty supplement to his teaching salary.  He urged me to get my paintings photographed and apply to get a booth for the 1969 summer fair.  Didn't feel I was good enough - was just starting to work with the paints.  Had no idea of how to put things all together for a show!  For some strange reason I put aside my doubts and sent in my application with not much expectation of being accepted.

Christmas was coming and I hitched a ride to Albuquerque to shop for some toys and clothes for my brood.  We made a stop at Kurt's Camera Corral ostensibly to get a new camera for Ernie - and walked out with a new Canon with a zoom lens for me!    That camera was attached to my arms until Kodak stopped making Ektachrome slide film!!!  I later gave it to my son when he was about 40 years old!  Digital cameras can't hold a candle to that Canon - I've tried several and still miss that old beauty.

There was no backing out now!  Am unable to remember if I saw the possibilities that lie ahead then, but I had a lot of questions.  What if my application was accepted to show at the fair in Albuquerque?  What if this turned into a way to bring in some money to help take care of these three little ones - they needed shoes and clothes and the doctor bills needed to be paid.  That winter one of the girls developed a serious ear infection and spent several days at the old St. Vincent's Hospital.

It was fast becoming apparent that my husband paid more attention to his own needs than those of his children.  Bills were piling up and I was hard pressed to keep up with the late notices that arrived with greater and greater regularity.  Tensions were building and tempers were short.  Although some time had passed since our move to Santa Fe, the marriage was not a working partnership.  We did not operate as a couple.  Confusion reigned I felt totally and completely helpless - trapped with nowhere to turn.  I looked at my babies and realized I was their only responsible parent.  It was definitely time to paint faster!