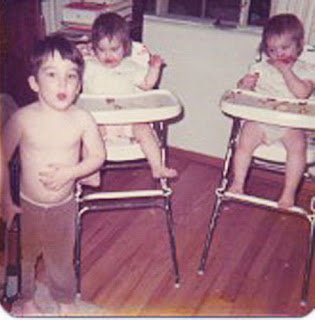 Oh, how I loved my baby boy!!!  He gave me so much joy and I was determined to make his life absolutely perfect!  I always was a dreamer! We lived in a three room apartment above a garage on Holbrook Road in Homewood.  The place was too small for the three of us and we found a larger house nearby. Even though we were renting, I decided to make it into a real home.  The wringer washing machine in the basement gave me hope that there were better days ahead. I really didn't ask for much.  When John was nine months old - surprise, surprise - another visit from the stork expected sometime in December of 1966. My husband was not thrilled.  After my announcement of another baby, he began making excuses and would just disappear into the Great Unknown.  His life became a great mystery.  We were always hurting for money and now another baby!  I really tried to understand - I was scared.

One day I sneaked into the glove compartment of his Oldsmobile and Whoa! - bank slips for several thousand dollars. Money from his mother.  I never knew how she did it on her salary from a small department store in western Pennsylvania.   She paid for him to go through four years at Notre Dame - tuition, clothes, spending money.  Instead of standing on his own two feet now that he was a husband and father, she was still in the habit of supporting him.  I didn't understand where the money went.  After paying the rent, I was always scrimping for food and utilities.  This was the beginning of my Great Awakening.

In the meantime, my belly just kept getting bigger and bigger.  If we had guests the object of conversation was my girth and they would just watch the baby start out on my left side and then visibly shift to the right.  No one looked at my face anymore, they just stared at my button popping maternity blouse.  Yes, an Xray  that November revealed I was about to have twins!  OMG!!  When my time came on the morning of December 9th, everything went so quickly that they didn't have time to sedate me - I was awake for the birth of two beautiful baby girls - eleven and a half pounds of New Life!

Revelation!  I began to suspect my mystery man was living a separate life.  I was slow to face reality.  My son and I were always alone.  On the day we brought the girls home from the hospital, I went to lie down for a short nap.  On my pillow was a long dark hair.  My hair was very short and red.  Bingo!  The only person I knew with long black hair was our babysitter!  Mystery solved!  Now what?  You dumbass!  How could you?  I was too exhausted to confront him.

The girls had come home from the hospital with some kind of flu bug.  All three babies came down with fevers and diarrhea!  181 cloth diapers in two days!!  My family was overwhelmed and decided they would stay away until the "quarantine" was lifted.  His mother was thrilled that her son's obvious virility had produced not one baby, but two!!!  I had never been so alone in my life.  My little babies were so sick!  All I needed was a good night's sleep!  Please, God!  After a week they began to recover and some sort of routine began to emerge - Even in all the chaos there was the hope for better days!.  One step at a time - one day at a time - short naps in between.  Formula, bottles, diapers.....my reality now was keeping my little ones fed and healthy.  I was in overload and exhausted. There was no time to think about my husband and the babysitter.
- October 01, 2018 No comments: