WORD PAINTINGS #41 - IF WISHES WERE FISHES 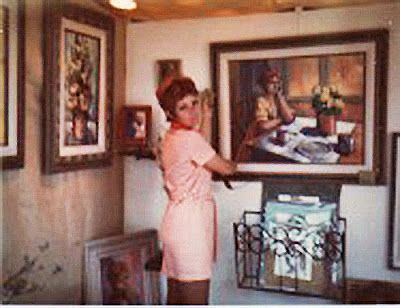 If wishes were fishes, we'd all have a Feast!

Honestly I don't have the courage to describe all of my childhood, except to say that my brother and I had some truly terrible experiences.  Although the rest of the family knew the reality of what our lives were like, they helped when they could, but were relieved when they could go home.  No one saved us.  Years later when my babies were old enough, I bought them the game of Life as a Christmas present.  When we opened the box, they had left out the instructions!  That, in a nutshell, is the story of my life.

The exact sequence of events in 1969/1970 escape me.  I know that my mother-in-law visited from Pennsylvania just in the middle of my preparations for the art fair in Albuquerque.  She didn't have a clue as to the state of my marriage.  I had been sworn to secrecy regarding the babysitter and the real reason for our move to Santa Fe. She knew nothing of her son's true character!  Her mission during this trip was to convince me that pursuing my art was unhealthy for my children.   Early in my marriage she told me that she didn't think I was good enough for her son. Her argument went unchallenged.  Anything I said to defend myself fell on deaf ears. Am certain she believed I squandered all his salary on art supplies.  My anger and resentment toward them both reached new and dangerous heights.

As the date of the fair loomed closer, I wanted to back out - to just stay home with my babies.  I had no self-confidence.  My father's favorite description of me "She's graceful as the bird they call the elephant".  That was the picture I had of myself.  No wonder when I caught my husband in a lie and challenged him, he told me I was crazy like my mother and I believed him!  However the truth was right before my eyes.  The children had outgrown all their clothes, they didn't have shoes, the groceries were stretched thin and I was unable to pay the bills.  We were deeply in debt. If I could sell some paintings and pay some bills, I had no choice - I had to stuff my fears and just show up!

My paintings sold well.  I came home with a little over $1000 which was a fortune at that time!   Wow!  Thought of a million ways I could put the money to good use.  Clothes for the babies, shoes - I felt on top of the world - pure joy!  Would it really be possible to earn a living with my paintings?  All I needed was a little support and encouragement!

THUD! Sitting in front of the house when I arrived was a brand new Oldsmobile sedan and my pipe-smoking husband smiling at the door.  My heart sank.  There was no way I could contain his out of control spending.   I stood up to him and showed him my anger.  That only lasted a minute - he became a manly man, outraged at my confrontation.  He raised his hands to hit me and I sunk into the corner of the dining room with my arm over my head for protection.  His yelling woke the babies. This time he went too far and threatened to get his shotgun and shoot all four of us.   I knew this was the end of my marriage.

The next day I called my father and asked for his help - I needed a way to get back to Chicago so that I could support my children.  He said "You made your bed, now lie in it."  There was no going back now - and there was no light at the end of the tunnel.  What to do, what to do?  The upside was the $1000 I had in my purse!