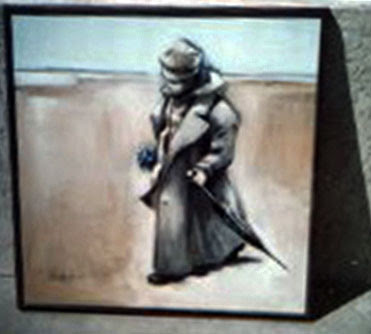 (Note: "Toby, A Time of Flowers" - One of my earliest paintings after moving to New Mexico.)

SANTA FE WINTER 1969 -  After the move from Alegre Street and the Jan Herring Workshop, life became quiet and very enjoyable. The babies were really babies no more.  When they were awake there was constant movement and mischief like the day they decided to make a crayon mural on the stuccoed wall in the hallway. It took a week of scrubbing to clean it up.  One girl dreamed up all the schemes and directed her sister to do the dirty work. Now I think I should have left it there to be celebrated and enjoyed.  We played in the backyard and made snowmen.  The four of us had some good fun. My husband seemed to enjoy teaching at the college. Ernie had purchased a ridgetop lot on the north end of town and stopped over often for dinner.  With great excitement he showed us the blueprints for the house he planned to build. There was no drama or chaos.  Money was tight but I felt new energy and believed that some brighter days were ahead for all of us.

My routine was simple - cooking, cleaning and a lot of painting.  My little "studio" in the corner of family room worked well.  There were blankets on the floor - big pads of paper and crayons for the troops. A load of laundry in the washer, and a big pot of vegetable soup on the stove - it was my version of a wonderful life! We were all cozied in that winter and I was inspired!  I had made about twenty new paintings.  Some of them were quite good.  Ernie had encouraged me to send in my application to the Albuquerque Arts and Crafts Fair to get a booth and exhibit that summer.  It seemed such a distant dream that I put it out of my mind and just painted.

We went to openings at Margaret's gallery - Fritz Scholder, Kevin Redstar, Gaspard, Fechin.  This was my new world.  I was no longer an observer, I was "in it"!  I met new people who talked art, lived art - all they thought about every day was making art!!!   The environment was alive with creativity.  No more musty museums.  This was where it all happened.  Suddenly I knew who I wanted to become....an imaginary door opened and I entered a new way of seeing and being.  I was hooked.

Jan Herring was a generous teacher.  In those five short days of the workshop she taught us the basics...color composition, negative space, lights and darks - a thousand elements of painting.  I learned that painting was a discipline - a life long learning process.  For me it was magic.  I had no idea where to start - I knew what I wanted, but didn't know how to get there.  I bought books on color and composition and studied after the children went to bed.  Progress, not perfection - never perfection.  One step at a time - one painting at a time. How did I get so lucky?

The heartache and turmoil of the past two years began to fade.  All I had to have was a willing spirit.  A path forward had begun to appear and I was becoming aware of opportunities.  A lot of questions.    To my mind,  Jan's life was perfect. She took good care of her husband and children.  While her husband was working on the ranch and her children were in school she painted.  All her efforts had paid off.  She taught her workshops and sold her paintings.  She did what she loved and at the same time contributed in large measure to the financial well being of the family.  I wanted to be her!  Where do I begin?

My husband was becoming concerned.  He didn't recognize the person he had married.  I was all NEW!!  Realizing that I was serious about my painting, he told me it was okay for me to do it as a hobby; as long as it didn't interfere with my duties to the family.

An envelope arrived in the mail addressed to me. I had been accepted as an exhibitor in that summer's Arts and Crafts Fair!  Information regarding my booth number and instructions would follow shortly.
This was unbelievable. I had my new beginning and never once looked back!
- October 07, 2018 No comments: