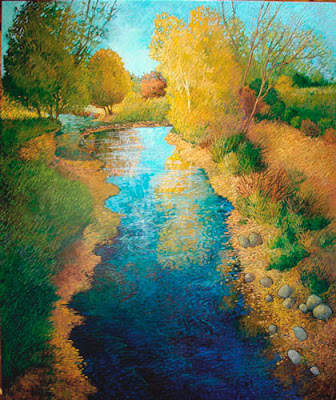 TAOS 9/21/18 - This has been an upsetting week for any woman who has experienced any kind of abuse - friend, partner, stranger.  Chuck Grassley and Orrin Hatch have risen again like ghosts from the Grave of History Past!  It honestly makes me ill to see them on TV and my mute button is getting a real workout!. I remember the Anita Hill hearings - their attempted destruction of a good strong woman who had the courage to step forward to oppose the nomination to the Supreme Court of that sleeping giant Clarence Thomas.  Here they are again - spectres of the good old days when men were men and women knew their place!!  Am hoping in their next lives they return as  women who need men to treat them fairly - just to be honest and upstanding arbiters for the rights and dignity of women! Politics be Damned!  I am angry!

Sitting on my little red sofa here in Taos this morning, I have decided to share some of my experiences of domestic abuse.  Was ready to tuck it away and just talk about my art life.  Truth is the abuse was the impetus for me to create a safe and sane life without the daily drama.  It has taken most of my lifetime to learn how to live peacefully.  The painting above is titled "Sanctuary of Padre Martinez".   Taos has been my haven for at least 35 years - my own personal sanctuary - amazing Grace!

Fair warning - some of next week's posts might not be easy to read.  My intention is to avoid blame - a lot of what happened between me and the men in my life was normal behavior back in the day - it was cultural.  I just happened to be caught in the riptide of change from a male dominant society to the women's movement - it was crazy making!  All I know is that I navigated through this time as best I could.

"If people wanted you to write warmly about them, they should have behaved better. ..." - Anne Lamott
- September 22, 2018 No comments: