BLOOM WHERE YOU ARE PLANTED! 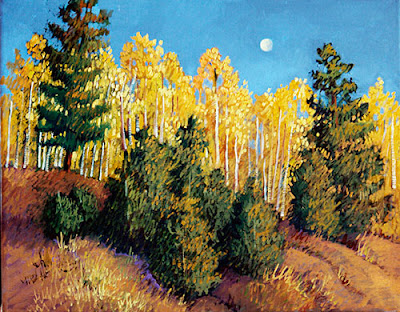 Santa Fe 1967 - A very smart self-help guru once said "If you don't know what to do, do nothing".  The trip through the mountains on the back of that Harley was what I needed to settle down and stop moping around.  It is not healthy to stay sad forever!  I needed to take stock of my situation, look around and be grateful for surviving so far - there was a lot of life still in me, I had just numbed myself out in order to get from Chicago to Santa Fe.  It was time to make some decisions.  Truthfully I wanted out of my marriage, but decided to make a genuine effort to try and make it work.  My most important decision was to be content with what I had at that moment....my three beautiful babies, and this bright and beautiful place called New Mexico.  So I washed dishes, changed babies, scrubbed floors, swept up piles and piles of Cheerios - and when time allowed, I painted.  Little by little I started to feel human again.

There was a sketch class every Tuesday evening in the basement of the art museum.  It cost $5.00 to work from a nude model for two hours.  I got a large newsprint sketchpad and some vine charcoal.  My husband babysat and Ernie gave me a ride to the museum.  I had never worked from life before.  The room was narrow with a platform in the middle for the model to pose.  One fellow would get very excited and peek under his arm to see if anyone was looking at the size of his erection! What is this decadence?  It surprised me to discover that I was a real prude!  That was the beginning of the end to some shyness on my part!  I loved the class - no teacher, just a facilitator who took our money which paid for the model.  By the time the classes were over I was able to focus enough and came away with some very good drawings!

Next I signed up to stuff flyers in envelopes for Gene McCarthy's campaign.  It was only one afternoon a week and I got to meet some very interesting people.  New Mexico politics at that time was still trying to grow out of the old political system called "the Chicken Montoyas".  I never understood the meaning of that phrase, only that it was the way it was done in the past. The intrigue was fascinating!  Even though the campaign did not end well, my choice to get involved helped me feel a little more grounded in this new place.

In early December the twins celebrated their first birthday.  I bought some party hats and made a big "twinnie" birthday cake - we had balloons and little presents for all three.  It became a tradition that we put up our Christmas tree right after their birthday. My husband and Ernie went off into the woods and came back with a pine tree with a really bare backside - it didn't matter, this was progress! We unpacked our stash of ornaments, untangled the lights and the old house was made brighter and happier!

Ernie exhibited his sculptures at Cita Platt's gallery in El Paso.  She had a pre-Christmas group show for all the artists that year.  While there, Ernie met Jan Herring a very successful painter and teacher from the small farming town, Clint, Texas.  Jan taught week-long painting workshops at the Lodge in Cloudcroft every year.  On the slimmest chance he thought I would be able to attend, Ernie paid the tuition and signed me up for one week of classes the following summer!    Was I being given a chance to bloom?