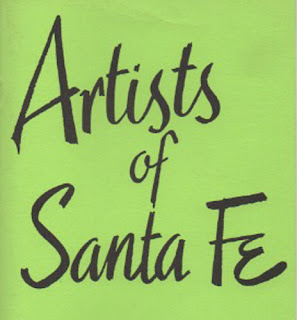 The course of the rest of my life was set in these three important years.  My children and I lived by ourselves on Kiva Road in Santa Fe.  Ernie was a frequent visitor and somehow he began to complete the picture of family life for us.  The children had visits to the "ranch" out on Highway 14 to visit their dad.  Always had a good hot meal and home baked cookies when they came home.

At first all was confusion.  Gradually a routine began to develop.  Job at the law office, managing debt collectors and painting every night and on the weekends when the kids were away.  Developed the little Hallway Gallery right outside the law office and kept the walls updated with new paintings.  Those random "Hail Mary" sales to clients helped to pay the bills.  Children, job, painting; little by little the emphasis on painting became my true mode of survival.  Bills were being paid, maybe not on time, but I was starting to feel that I was being made whole in some strange way.

Ernie and I continued to do the art fairs in Albuquerque and Austin.  These events were a very important part of my education.  There were crowds of people, many of whom stopped by our booths. Some were attracted to Ernie's beautifully welded sculptures.  He was the star.  Gradually things evened out and we could both be proud and happy at the end of each show.  Lessons learned - invaluable interaction with the public!!!!  For every show I tried to up my game - better paintings, better sales.   The quality of my work began to improve.  That old adage that "practice makes perfect" was working.  More than fifty years later I still haven't reached perfection, but it is fun to keep trying.

The nights in the studio after the children went to bed was my precious time.  Peace, quiet - some good music - total concentration.  Although I have never had a formal art education, I took many evenings to read books on color, composition and everything a real artist needed to know.  Initially painting was my way of survival, gradually it became my way of life.  I began to believe that, if I worked hard enough, I might become a "Real Artist".  In that case I found myself in the right place at the perfect time.

Santa Fe still had the feeling of being a small village.  It hadn't been a long time since the woodsellers on the Plaza replaced their donkey driven carts with old pick up trucks.  People loved to tell their  family stories and I listened deeply regarding each story as a privileged confidence.   How did I get so lucky?  Some days when the children were away I would just wander around the Plaza - visit the museum, the Palace of the Governors, the Shop of the Rainbow Man - have lunch at the counter at Woolworths - just sit on a bench and watch people walk past.  I was a listener, an observer; this was my new home....would I ever feel that I belonged to this place?

The only two galleries - Jean Seth on Canyon Road and Margaret Jamison across from La Fonda - were learning this "art business" right along with the rest of us.  There was some rivalry, but everyone was excited by their derring-do to start a "new thing" in this small, still somewhat provincial town.  The openings were exciting - this was before the time when people just came for the drinks and snacks.  New artists began to emerge.  Jean Seth focused more on the down home local painters in and around Canyon Road.  Margaret had been friends with Fechin and Gaspard and was fond of the Taos painters.  She took a chance on a little known Native American named Fritz Scholder and kick- started what was later to be his international career.  Both galleries were the only real art venues in town.  Canyon Road was still an unpaved side street where most of the artists lived and had their studios.  In day to day life with all its ups and downs, one doesn't realize that they are living times that will never come again....the right place at the perfect time!

It was too soon for me to feel that I was part of this unusual place.  I still had one little toe in Chicago.  The tough Polish part of me lingered.  The fighter in me came out.  I was becoming part of a very competitive community of wanna-be artists - and I soon learned to hold my own.  At first it was all about financial survival - taking care of my children, paying down what was at that time a mountain of debt.  My days in the Advertising Department of Holiday Magazine in Chicago began to pay dividends.  Learning how to promote my work was essential.  Art shows, the Hallway Gallery were lessons learned - invaluable.  Some days were successful; some were complete flops.  The most important lesson was that the quality of my work really mattered to me.  I wanted to be a Good Artist!  This was my New Beginning.....
- February 16, 2019 No comments: