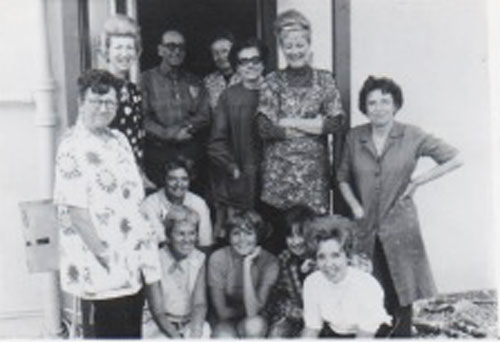 
As mentioned in a previous post,  I celebrated my 79th birthday three weeks ago; life was very different for women back in the day!  Culture shock for me really wasn't because of the move from my mid-western roots to mostly Hispanic and Native American city of Santa Fe.  The difference in the status of women between the two places made me question my entire belief system - the rather closed and restrictive society of  women in the Polish-American community as opposed to the wide open possibilities of a small but burgeoning city full of talented and creative people in the Southwest.

Growing up Catholic in Milwaukee and Chicago, the role of women was predestined.  It was shaped by religion and ethnicity.    To quote my father again, "No daughter of mine will be an artist!" - his word was Law!   Men ruled the roost.  Women obeyed. That is the way it was back then.  Higher education was frowned upon for girls.  Marriage was the only acceptable option.  If a husband was abusive or unfaithful, the parish priest was ready and willing to talk to the wife and convince her of the marriage vows.  Separation or divorce was not an option. Taking care of one's family, husband, children and elderly parents was predestined.  Only the most determined and courageous girls escaped.

I often refer to my transition from Chicago to Santa Fe my "Dorothy and Toto" moment - the gut punch of infidelity on the part of my husband was the tornado that picked me up,....babies, diapers and everything I believed to be true and landed me where I belonged in the first place.  It is no accident that in my first posts I honor three amazing women - Jane Petschesky, Jan Herring and Margaret Jamison.  Jane happily worked alongside her husband at the department store and their horse ranch.  Jan left her family farm in Clint, Texas to study with a famous Polish artist.  Painting and teaching her way of caring for her family at the same time able to express herself creatively.  Margaret picked herself up from a devastating loss to become one of the most respected art dealers in the country!  These women showed me the path to change.   wherever they are now, I hope they know that they made a real difference in my life.

Truth is I never lost those women from Chicago/Milwaukee.  From them I learned how to navigate the world in spite of the cultural and religious limitations.  Am grateful for their good hearts and kind ways.  I was caught between two ways of being - a life without many choices, or this wide open wild West where I could eventually become real - I could draw and paint and raise my babies without a discouraging word!  Wow!!!