WORD PAINTINGS #61 - BABES IN THE WOODS 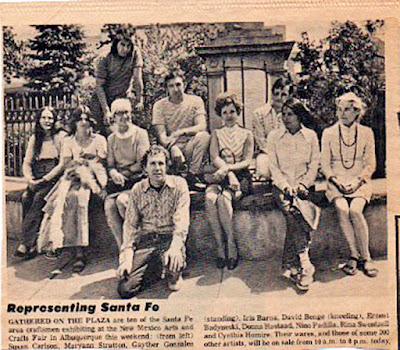 We were innocents - much like an isolated Amazonian tribe that had never seen an airplane.   We had no clue that Santa Fe would eventually rank second only to New York in art sales! All we wanted to do was make our art and then maybe we could show our work at jean Seth's Gallery on Canyon Road or at Jamison gallery at La Fonda.  Many of the potters and weavers sold directly from their studios.  There were really fine painters to the north of us in Taos following in the footsteps of Blumenschein, Higgins, Couse, and Sharp.  Rod Goebel, Walt Gonske, Ron Barsano, Ray Vinella would set a new standard for New Mexico artists. Toward the south in Albuquerque were the Moderns like Raymond Johnson who worked to build the fine art collection at the museum there.

At this time the Native Americans had very few venues to show their work except for Indian Market and at their pueblos.  There were a few who had regular spots to show their jewelry in front of the Palace of the Governors.  They, too, had no idea that the market for Native American art was about to Explode!

Rex Arrowsmith had a small bronze foundry on the corner of Paseo de Peralta (now the home of Nedra Matteucci Gallery). About this time he entered into partnership with a very ambitious ex-pat Texan named Forrest Fenn. A young fellow named Tommy Hicks started a bronze foundry in the small village of Tesuque just north of Santa Fe.  A group of "hippies" started the Glory Hole Glass Works on Canyon Road.    The hub of activity on Canyon Road was Three Cities of Spain (now Geronimo's) - across the street there would be a new restaurant named Ernie's. Jean Seth benefited greatly from all the traffic being engendered by these new businesses.  My friend, Edda Lynne Allen, opened her gallery and began showing a young Native American painter named Dan Namingha (for many years now the owner and main artist for the very successful Niman Gallery).

It would take a while, but the cowboy artists were just beginning to be aware of the new market opening up in Santa Fe.  They were well fed by art collectors in the oil business - Dallas and Houston.  Little ol' Santa Fe????  Let the games begin!!!

Let me paint another Word Picture.....Compared to 2019, artists had very few ways of building a client base, unless they did bank shows, were socially adept (attended all openings, parties) or hauled precious work to outdoor exhibits. Ernie and I attended at least two or three art fairs a year.  I kept names of lookers and buyers on 4"x5" index cards and would send postcard invitations to our exhibits.  Somehow it worked - sales were usually good.  This second "job" of mine was paying the bills!

Imagine trying to do an art business today without computers or cell phones - or a support system of available framers, photographers, and sellers of art supplies. A man named Bernie Bowman and his partner had s small frame shop in Burro Alley next to the Palace Restaurant.  He sold to a fairly high priced clientele and his prices were out of my reach. I bought stock frames in Albuquerque.  In the middle of the store was a small table with some paint tubes and a few brushes.  If we needed to stock up, we had to travel to Langell's near the university in Albuquerque.  No  digital cameras back in the day! A fellow named Milo was a very laid back "professional photographer" who could be called upon to do black and white publicity photos.   Trying to put all the pieces together for an exhibit was indeed a challenge!

Truth is, except for my workshop experience with Jan Herring, I had no idea how a REAL professional artists managed - I still had a lot to learn!!!!! My art life was made easier because Ernie had gallery experience in Santa Fe and El Paso - both good markets for his sculptures - he paved the way....
- February 28, 2019