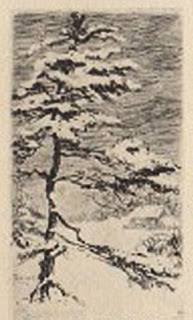 January 26 1967 - It was an ordinary afternoon John had his supper and I gave the twins their bottles.Expected my husband home around six.  Only a few bottles of formula left; he planned to pick up a case of Similac on the way home.  The wind started howling around five and then it started snowing.

This was the worst snowstorm in Chicago's history. By the time it was over 23 inches had fallen -  there was a 46" snow drift in our front yard - there was no longer clear path to the house.  The twins were six weeks old - only two bottles of formula left.  The phones were out.  My husband never made it home that night.  Listening to the radio reports it was obvious that we were living through a huge disaster.  Store shelves emptied within a very short time.  Semi trucks were stranded on the highways and the drivers sold milk and bread fot ten dollars each! Phone service was out and here was no way to reach my husband.  I had no idea where he might be stranded.  Many people died that night.

The wind continued at 50 miles an hour.  Worried the windows might shatter, I moved the baby cribs into the living room and made a bed for John on the sofa.  I settled into a chair near them and began taking stock of my life.  I shivered with fear and fatigue.  Looking at my little ones, I came to a new reality - it was just the four of us....we were on our own.  This was one of those "come to Jesus" moments.  If the storm continued, what would happen?  We were trapped in a situation not of our own making.

The next morning I heard someone shoveling snow outside of the back door.  I had never met my neighbors - an older mother and her bachelor son.  Finally I opened the door and the man introduced himself.  He said he was taking his sled to the pharmacy about a mile away - did I need anything? Told him I was out of formula for the babies, but I didn't have any money in the house.  He told me not to worry, he'd bring some back for me, which he did.  I almost collapsed with relief. Later when I tried to pay him, he wouldn't take the money.The strangest twist of events is that he and his mother kept to themselves and I never saw him again.  I am convinced there are angels among us every day!

Last week my brother and I talked about the day after the blizzard.  Most of northern Illinois and parts of Indiana were completely paralyzed by the storm.  Snow plows were out, but it could be days before things got moving again.  My Uncle Roy actually walked over from his house with a shovel and dug out a walkway in front of the house.  Later my Aunt Jeanette came over with some food. My brother brought some bread.  A measure of safety and calm was being restored.  However that night has stayed with me all these years.  Am still in the habit of buying $200 worth of groceries the minute I see two snowflakes!  They interviewed many people who went through that event 50 years later and I found "my people" who shared their trepidation still when it begins to snow!

My husband did not appear for three days.  He seemed quite unfazed and said he found a room in a motel.  I later discovered he waited out the storm with the babysitter!