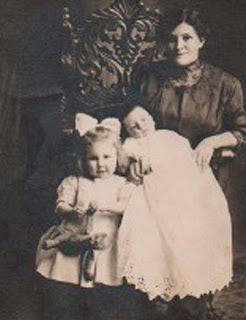 Note: In the photo above my beautiful grandmother Clara holds my father. Beside her is her daughter.  A third child was born after my father.  A fourth pregnancy followed his birth - she died giving birth to twins.  The wake was held in the living room of the house on Fletcher Street.  Clara was waked and buried with the twins at her feet in the same coffin.  Am certain that my father and his siblings experienced trauma from this event that lasted for the rest of their lives.  In another family album I saw a photo of my mother about the age of five - she was malnourished and neglected and her little legs were horribly bowed from a severe case of rickets. My mother and father were severely damaged souls well before they met for the first time!

One story I heard was that my grandfather hit my father so hard that his eardrum was shattered.  When he tried to sign up to fight in WWII, he was rejected because of his bad ear.  Both my uncles served during the war - one in Burma and Calcutta and the other fought in the Battle of the Bulge.  One day my father received an envelope with a white feather. He sat at the kitchen table and cried.  My father began drinking at a very early age - he never stopped - he became an alcoholic.  I can't remember ever seeing him sober.  He was abusive.  I did everything I could to avoid his wrath.

Our mother suffered from mental illness.  My brother and I weren't very old when she was released from the sanitorium after having received 21 shock treatments.  I can remember her barely being able to walk or talk after she returned home.  One day we tried to help her walk to the end of the block and she had to stop every few steps.  I wanted to help her and was afraid if she fell we wouldn't be able to pick her up.  We were frequently sent to the corner drugstore to get her bottles of Lydia Pinkham's Tonic which contained a high percentage of alcohol.  Eventually the pharmaceutical industry heard her cry for help and she became addicted to valium - 500 tablets a month.

Talked to my brother the other day and he facetiously said our family put the "fun" in "dysfunction".  In reality the fun times were few and far between.  I loved my parents!  However I have often described my father as Archie Bunker on steroids without the humor.  It was my job to take care of my brother and I did my best.  Tried to "fix" them, make them better - it was a losing battle. Our home was a very sad and scary place to live.  I still cringe if I hear a loud argument.

How do these stories fit into the narrative of my posts?  The trauma in my family was generational.  I was conditioned at an early age, just by watching my parents interact with one another, that loud arguments and verbal abuse was normal.  They would often take their anger out on us.  Drawing and painting was my "dreamtime" and I could shut out the noise.   In the summer my brother and I would spend the whole day at the swimming pool in Kosciuszko Park.  We wouldn't go home until dinnertime. The park lagoon froze over in the winter and we skated all day and drank hot chocolate at the nearby shelter. We had many friends and if you asked us after our day in the park, we would have told you that we had a really good life.   We thought this was the way everyone lived!

What if my fierce hope to become an artist was only a daydream?  I prayed to be rescued.  There was no escape. When that darkly handsome young man appeared at my door for a blind date, I saw rainbows!  Marriage seemed to be the perfect solution to my dilemma!