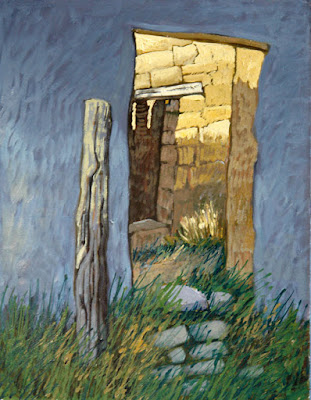 SOMBRIO DRIVE, CASA SOLANA - We began to settle into the house - adjusting to a new kind of normal - family life. Of course we had to have furniture.  Tom Broome was Chief of the Voluntary Fire Department.  When he wasn't battling blazes, he managed his family's furniture store.  We took out some credit and purchased a dining set, sofa and some chairs all with a definite Southwestern flair.  We didn't know it then, but we were at the front end of "Santa Fe Style".  The twins were starting to walk. They had their own language.  When they didn't want us to understand what mischievous scheme they were concocting, they would resort to their mysterious form of gibberish.  Bought my son a little bike and a pail and shovel - when he wasn't riding, he was rearranging the landscape.  I set up my corner in the family room - a small easel, the worktable and all my paints and brushes.  As soon as there was some semblance of order, I began to put to use the information I gathered from Jan's workshop and painted in my "spare time".  My husband quit his job at the high school and began teaching at a nearby college run by the Christian Brothers.  Ernie, the sixth member of our family had sold enough sculptures to purchase a plot of land high on a ridge slightly outside of town.

Weekends were our favorite time. We began to explore - picnic lunches at the Pecos Monument, lunch at a fairly new restaurant called Rancho de Chimayo - trips to galleries, shops on the Plaza, Healy-Matthews Bookstore on Marcy Street, lunch at The Shed.  On one trip to Hyde Park I said "This is God's country" - My son said " I just saw him" - ''Where did you see him, John?" - "Back there - He was just walking down the road!"  He was so sincere that I turned around and looked where he was pointing!

What I loved most about our new home were the people and their eagerness to tell me their stories - their family histories.  I was awed by the ancient pueblo culture and knew there were mysteries I would never fully understand - I was content with not knowing.  I loved the warmth and kindness of my new Hispanic friends.  And then I learned to love the food, but not at first.  On our first trip to Chimayo I ordered the only meal on the menu that didn't have chile on it.  Arturo Jaramillo  urged me to try an enchilada, but I was afraid it would be too hot.  Hah! Look at me now, more than fifty years later - green chile a definite addiction!

How do you describe the brilliance of a New Mexico sky to someone who has never left Chicago?  My eyes were still trying to adjust.  How does one begin to measure distance in miles instead  of city blocks?  Absolutely nothing was familiar to me.  I had lost my bearings.  My Big City girl persona no longer applied to life in this strange landscape - I had to listen and learn.   Time for me to get real!