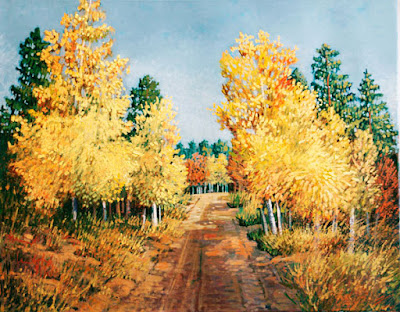 Stories - I love stories!!! Being a newcomer, everyone wanted to tell me their own family history in New Mexico.  I listened and asked questions.  Most often I was given the gift of generations; stories passed down through families - oral histories that never found their way into print.   It became a habit to listen - my only regret is that I didn't write all of it down - some of it is now lost to memory,

Santa Fe was very small in 1968.  Ernie was well known among the "in crowd" having been introduced by Margaret Jamison.  She created quite a local clientele for his sculptures.  One core group was made up of doctors, lawyers, realtors - all long time residents. At one of these parties I met a prominent realtor named Laughlin Barker who told me that his mother had written a book called The Wind Leaves No Shadow.  It was the story of La Dona Tules, a young girl from Taos who later owned the largest Monte parlor located in Burro Alley.  She became so rich that when she died, she offered a substantial sum of money to the church. She insisted that her grave to be situated right next to the Cathedral.  This was a place of honor among Santa Fe society. Am sure it caused quite a scandal, but the Archibishop took her money and gave her an honored spot in the little graveyard.  (Many years later I worked for a law office on Cathedral Place in the old Archbishop's office.  Was friends with a Mr. Merton, the Custodian of the Cathedral.  One day he ran in to tell me that they were expanding the church buildings and that day they were transferring the remains of La Dona Tules to another cemetery, possibly Rosario which was right over our back fence when we lived on Alegre St.!)

Through Ernie we met Bernique Longley, well known Santa Fe painter who lived on Camino del Monte Sol.  She had built her studio/house from scratch, brick by brick!  She told me stories of her neighborhood - that Willa Cather would visit and stay in a house next to her. Bernique was a great party giver (she sold a lot of her paintings through social connections).  At one party I was introduced to photographer Laura Gilpin.  I sat next to her while she told me stories of her Navajo family on the reservation - subjects of her most iconic photos.  Well known poet and translator Witter Bynner lived right up the road, as did Randall Davey.  The sad part is that I had no idea who these people were in the context of Santa Fe history - my regret is that I didn't pay close enough attention.  The atmosphere at these gatherings was electric, gossipy and oozed creativity!  I was in Art Heaven!

Some afternoons I had the chance to walk down to the Plaza and just explore.  I loved the Native Americans selling their jewelry in front of the Governor's Palace.  The museum was a mandatory stop for me.  Spent many hours at the Shop of the Rainbow Man; my main purpose was to stare at two Nicolai Fechin drawings hung high up in a dusty corner of the shop - they were price at $2000 each back in the day.  There was a bookseller right down the street under an old portal.  He had a full set of novels by Thomas Hardy, signed by the artist and priced at $400!  The books were situated on the top shelf of the shop away from lookie-loos.  He took one volume down and let me open it, I touched Hardy's signature!  I still lust after that set of books!!  That day I bought a copy of Ruth Barker's book about La Dona Tules!

One of the worst experiences of my life brought me to this beautiful place with these all amazing people.  I was beginning to wonder if our move had nothing to do with my marriage.  Was it possible that I was born in Chicago by accident and I really belonged in New Mexico from the very beginning?